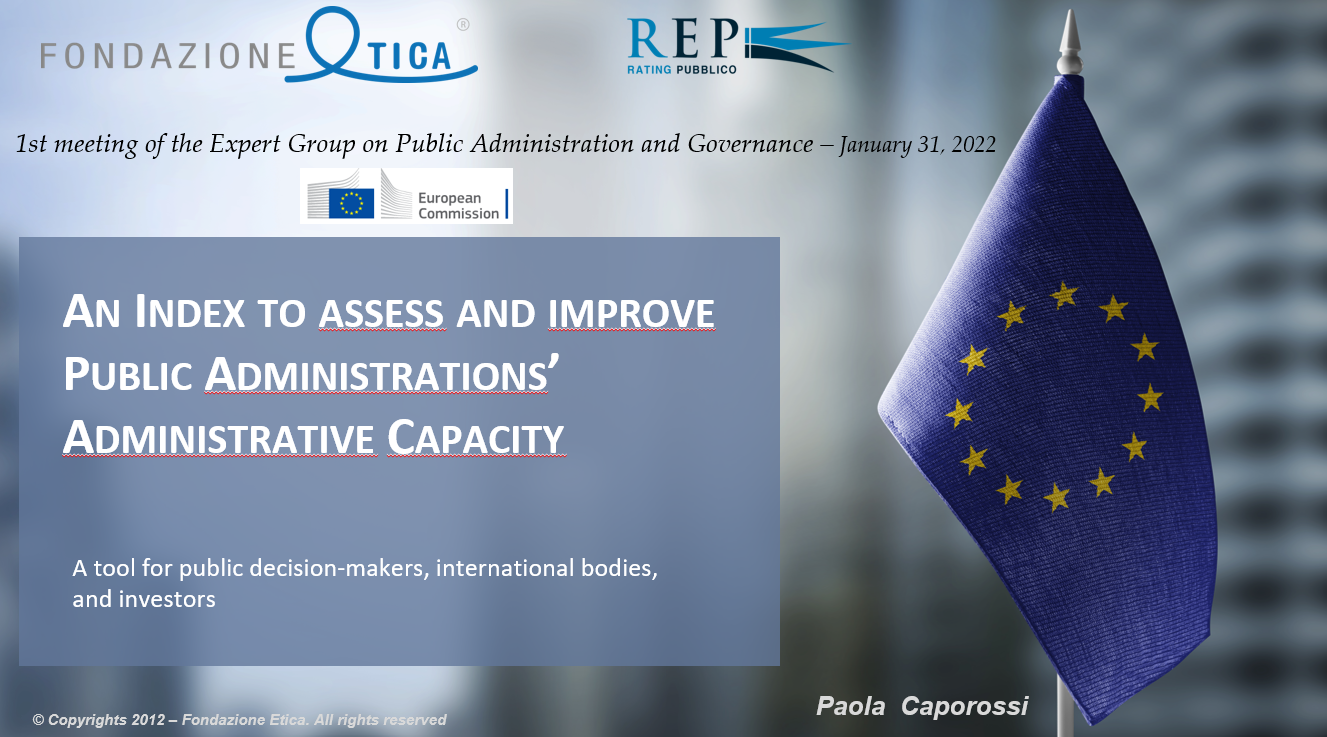 European Commission: Ethics Foundation to the Group of Experts on Public Administration

Fondazione Etica took part in the first meeting of the "Group of experts on Public Administration and Governance", convened on January 31st by DG Reform - Directorate General for Structural Reforms of the European Commission.

The inaugural session, chaired by the Director General of DG Reform, Mario Nava , was attended by representatives of the national ministries of the 27 Member States and Norway. For Italy, the Head of Cabinet of the Department of Public Administration, Marcella Panucci, intervened. The meeting was also attended by European and international organizations, including OECD, World Bank, Council of Europe, EIPA, European Parliament, ECFIN.

With the Group of Experts, the Commission's intention is to create a platform for comparison on the Public Administration between member countries. The latter, in fact, is called to play a central role in the post-pandemic economic recovery and it is therefore important to be able to share experiences and good practices: while differentiating themselves for different characteristics, the European PAs are called to face the same challenges.

In particular, data plays a crucial role in knowing the current state of Public Administrations: starting from the data, DG Reform will be able to refine its support tools to strengthen the administrative capacity of member countries with more targeted actions on their individual needs. . Bringing data into the PA, underlined in his speech David Mair - Joint Research Center of the European Commission - to support the public decision-maker: "good science at the right time and in the right place, so that it is on the desk of the decision makers and administrators exactly when they need it".

Paola Caporossi was called to intervene precisely on the data and innovative methods for assessing PAs: she explained what the Administrative Capacity Index elaborated by Fondazione Etica is and is for: a measurement index of public governance , based on objective data that Public Administrations are called upon to publish in Italy, but not only there. Since all EU member countries, with the exception of Austria and Luxembourg, have adopted a law on the right of access to the documents and information of the PAs, the index is also applicable in Europe.
This was also confirmed by a pilot project which the Foundation was commissioned by the European Commission - DG Regio, in 2021, relating to a sample of EU countries: Spain, Ireland, Finland, the Czech Republic, Romania.